0
“Into the Moonlight” by Jeffrey Schweitzer
24 January 2015
Next

Helen Oliver Adelson’s career as a painter began on York City’s Lower East Side in the late 1970s and early ‘80s. Helen became an integral part of the thriving renegade artistic and performance art scene, known as the Lower East Side, which became an international sensation. During this time Helen painted portraits of performance artists, musicians, film-makers and writers including Penny Arcade, Stephanie and Lenny Kaye, Mary Lou Whittmer, Louie Cartwright, Kembra, Samoa, Brian Damage and numerous other “underground luminaries.” Helen Oliver Adelson has had one-woman shows in Zurich and Paris and has sold numerous commissioned portraits around the world including a portrait commissioned by Brother Flip Crawley, the prison inmate whose words instigated the famed Attica Prison Riots.

Helen is one of the first artists that started the Carlton Arms Art Project. Between 1986-1987 she painted two rooms that became famous for years but later on were sadly destroyed by water damage and graffiti:

“It was a liberating experience. Two weeks is not very much time to paint a room. It was amazing to be in that room for two weeks with nothing to think about except painting it, divorced from life in general except for the new life there.

It was fun telling people if they would ask for a room in New York City to go to The Carlton Arms Hotel and ask for a Helen Oliver room.” 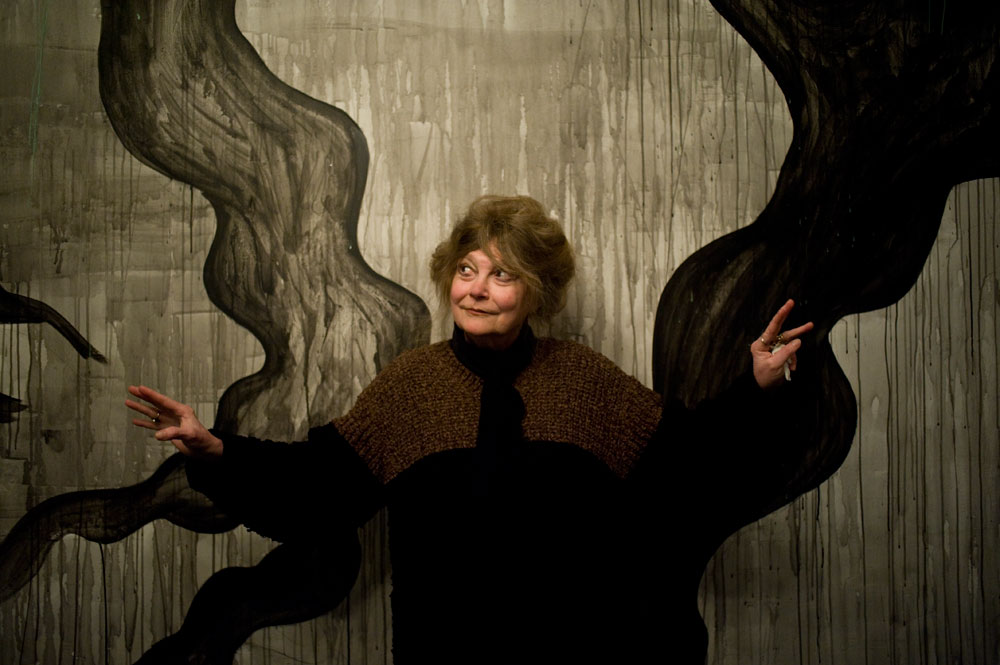 Coming from Tarquinia, Italy, where she resides, Helen has been here for two months now. Her wonderful new piece “The Beginning” in the walls of room 5A is an amazing accomplishment.

We feel honored to have that painting in our walls.

And most grateful to be around her, enjoying every minute of her creative process, her energy, herself …

Jon Barraclough is a British artist, teacher and researcher, born in Bradford, Yorkshire in 1957, currently resident in Liverpool and member of The Royal Standard artist’s collective. He works primarily in drawing, photography, performance, film and sound.

His work themes include: temporality and the temporary nature of all things, authorship and ownership, ambiguity and truth and the turning point between abstraction and representation, drawing as analogous to (and companion with) music or sound.

He currently teaches as a visiting professional at Liverpool Institute for Performing Arts and is working on the research theme ‘Why Drawing Now’ with Kate Genever, Amada Ravetz and Anne Douglas (part of the Connected Communities strand of AHRC). 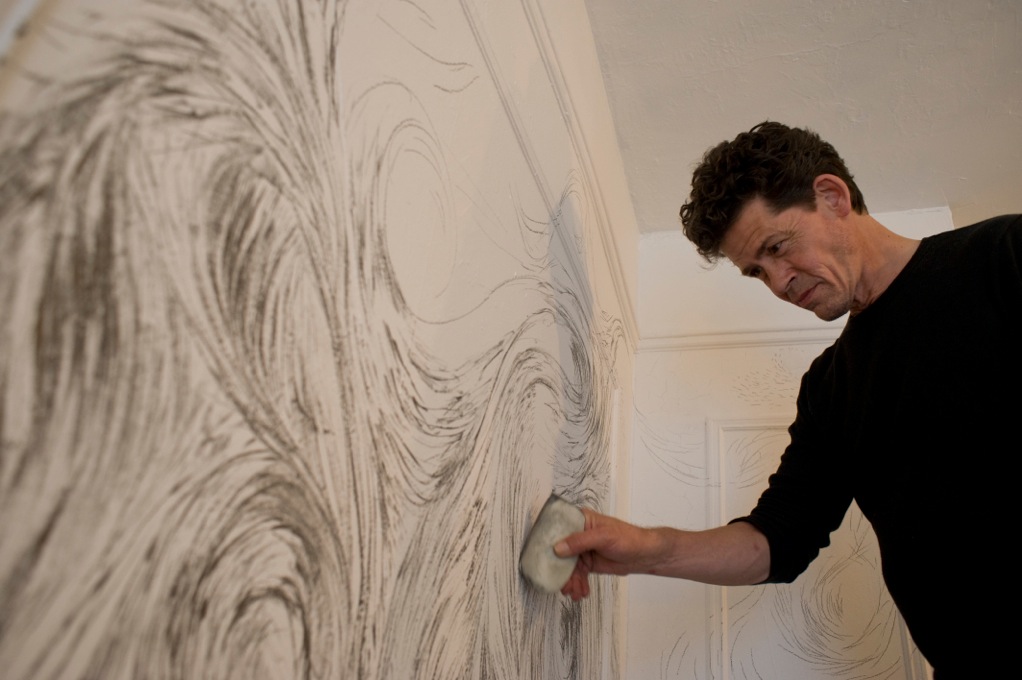 “The Carlton Arms Hotel has been a hotel for over a hundred years. It has seen the comings and goings of many residents and has been witness to a remarkable century of New York City’s history. When I first spent time in the room it soon became clear that the drawing would just emerge from the atmosphere. I just had to act as the note taker as I felt the friction of all those residents, imagined their stories and circumstances, highs and lows.”

Rafael Gluckstern He started to show his drawing ability from an early age. Consequently, as a result of his interest in drawing and painting, he started to paint with oils when he was eleven years old.
Due to his desire of knowing new places and people, and to experience new things that would enrich him as a person and artist, he studied fine arts in several universities in Spain. Finishing his studies in the University of Barcelona. After his studies he kept moving and went to live to different cities, such Madrid, Miami, Berlin and finally NY.

He usually works in his studio, but he has done several murals in the outside, specially in the city of Miami.
The main themes of his works have been specially colorful landscapes and portraits. His portraits not only reveal his technique but also the psychological nature of the subject. 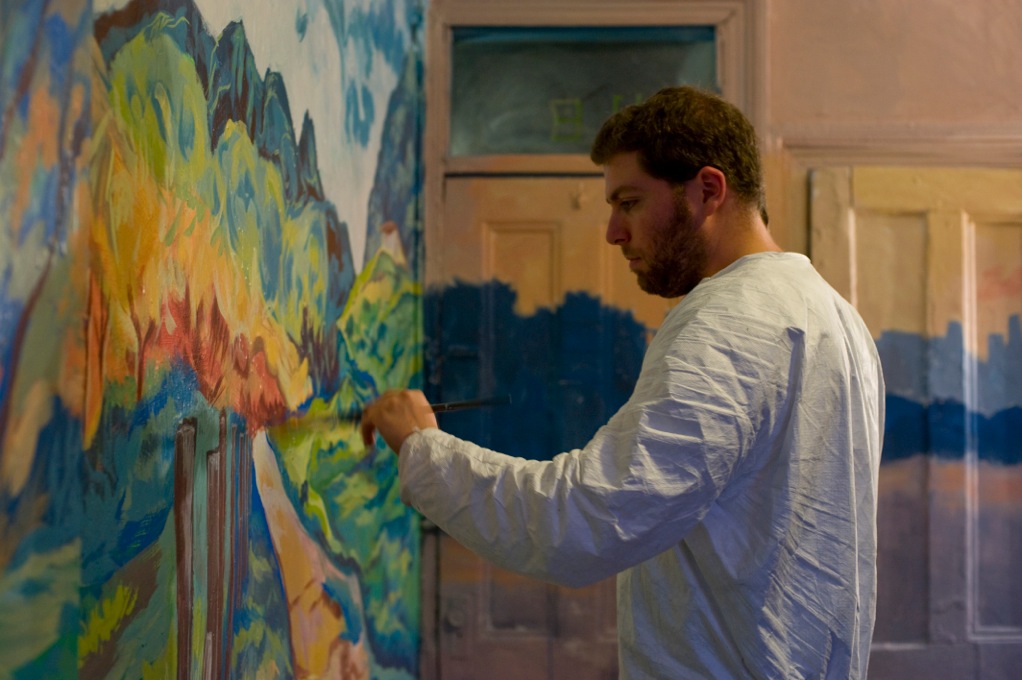 Post impressionism, fauvism and, above all, the expressionism of the beginning of the 20th century have influenced him most.
Artists like Toulouse-Lautrec, Vincent Van Gogh, George Grosz, Egon Schiele or Lucian Freud have been his big inspiration.
After many years of doing nature landscapes, and portraits, he decided to start a new series of paintings. Focusing his attention in old streets and buildings. Using this time stronger and brighter colours. Creating a lot of different textures, and twisting the shape of the roads and buildings, he generates the sensation of movements, the sensation that those streets and buildings inside his paintings are alive.

Marijke Brinkhof is an art director, stage designer and visual artist based in Rotterdam, NL.
Her comprehensive experience in theatre, tv, photography and film make her a sought after practitioner.
She is known for making miracles happen out of limited resources.
Marijke regularly works internationally, her portfolio includes commissions in Germany, Hungary and the UK. 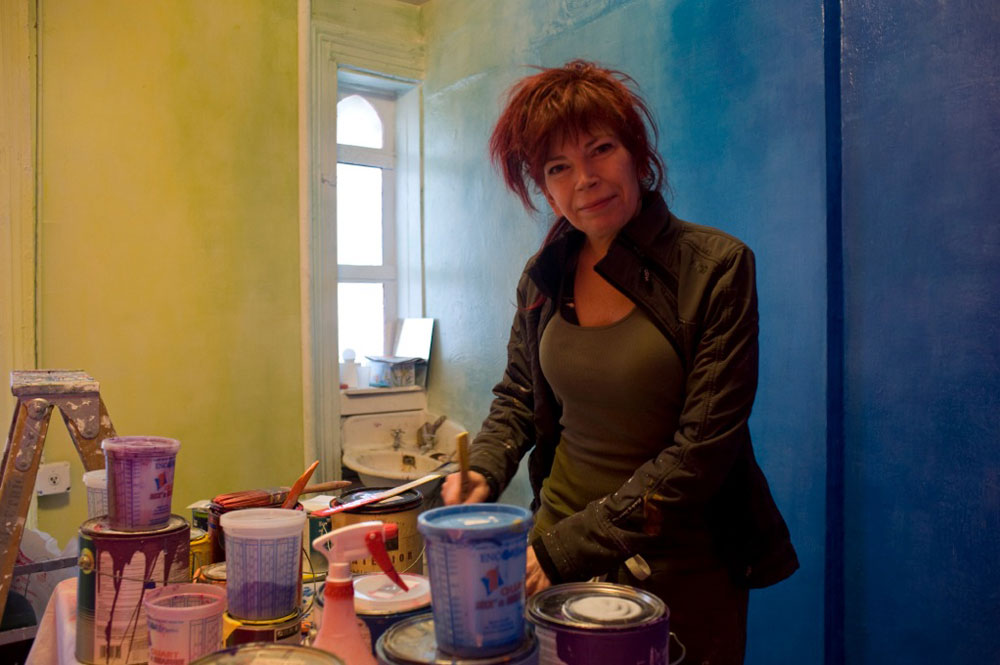 Room 14b is an abstract place where imagination and reality intersect. It is a relaxing comfort zone in the city, a shimmering space to dream and long for your loved (or lost) ones, wrapped in colours, reflected by mirrors of moods. 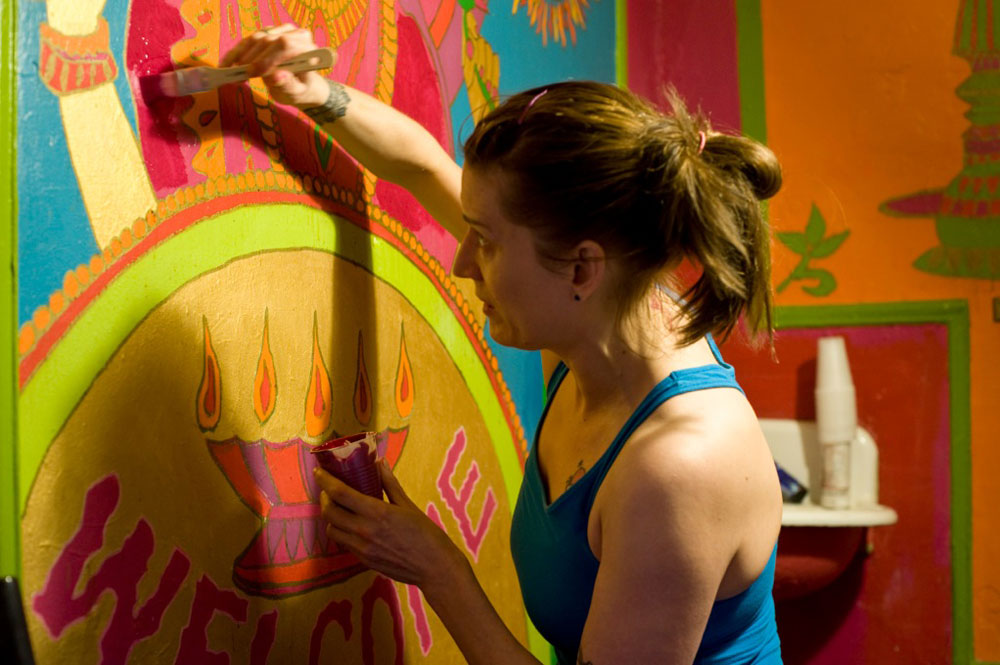 “I lived at the Carlton Arms from November 2000 through October 2001 while attending film school. Moving around from 10B, 6B, 8B and 6D, I eventually landed (after a lot of hinting and begging) a room of my own to design – 3C. Known simply as “the cow room” – white walls with black splotches and green astroturf – it had been painted by a German artist in 1995. Grungy and in dire need of some technicolor TLC, I decided upon a maximal color immersion Hindu theme: the “inner sacred cow.” During a brutal New York summer with no A/C, I lived and worked in 3C amid heat rashes, paint grime and spontaneous emotional breakdowns. Within two months, it was wall-to-wall vibrancy and I dubbed it, The Glowing Hindu Love Boudoir. Along with another artist’s room, the opening was scheduled for September 13th, 2001…
Around the corner from the hotel is the Lexington Armory, known to me then as the “emotional Ground Zero” where everyone went to find out any news about their loved ones. Applying final touch-ups to Ganesh, tears blurring my vision while the world spun out of control, was the most paradoxical, wrenching moment I’ve had as an artist and human. Amid the collective despair, surreality and weeks of endless sirens, I struggled to keep the faith that art, beauty and love are the only ways I know how to effect social change. As an nascent documentary filmmaker, I was unable to pick up a video camera. All I could do was feel – and six weeks later, leave.
My politics are based in aesthetics and emotional connection, and over the years, I’ve heard some amazing, affirming stories about 3C; and always hoped it would live on – a historic moment in time preserved in the positive. But to ensure its longevity, I knew it was due for a much-needed makeover and freshening-up. Given the magnitude of the circumstances in 2001, I’d long given up any hope or need of fêting 3C. Who could have imagined that exactly thirteen and a half years to the day – September 13, 2001/March 13, 2015 – The Glowing Hindu Love Boudoir would have its happy opening at long last, alongside the unveiling of four new rooms at the best hotel around? Full circle magic at the Carlton Arms.”